Composer captures his sentinels on album

“Like the immutable, unchanging Stonehenge rocks sitting there (on the album cover), these are my sentinels, the tried and true musical gestures that composers rely on." 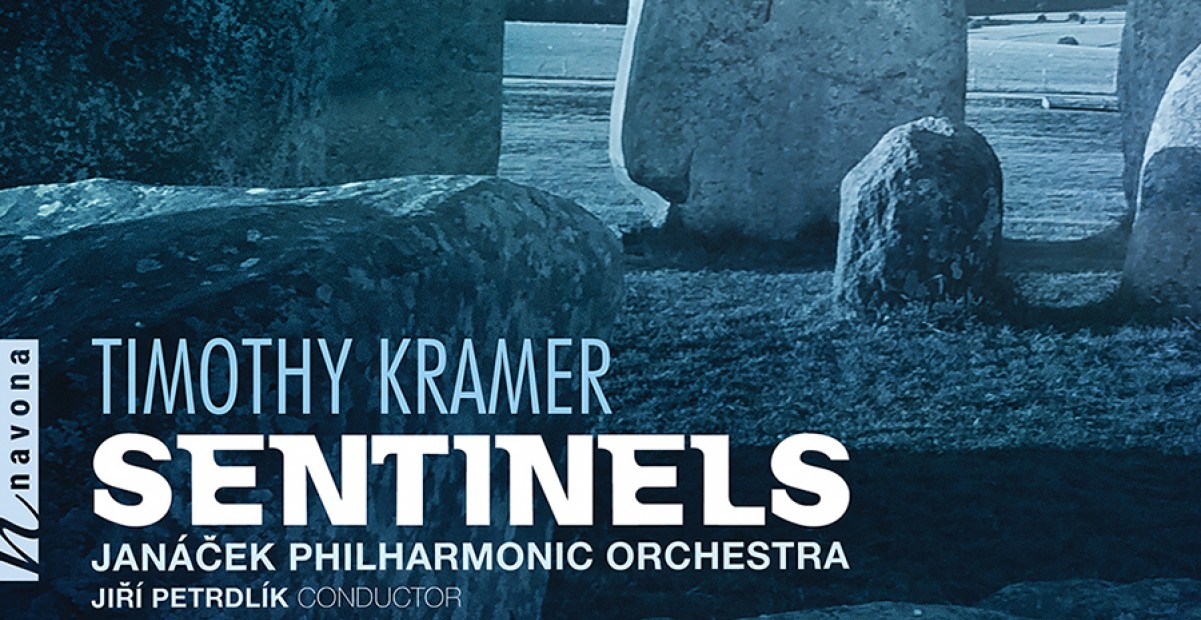 An Illinois College music professor and composer has released an album featuring performances of some of his biggest works of the past three decades.

Timothy Kramer, IC’s Edward Capps Professor of Humanities and Professor of Music, released “Sentinels,” performed by the Janáček Philharmonic Orchestra of Ostrava, Czech Republic, under the direction of conductor Jiří Petrdlík, on June 12 through the Navona Records label.

“Like the immutable, unchanging Stonehenge rocks sitting there (on the album cover), these are my sentinels, the tried and true musical gestures that composers rely on,” Kramer said of the album’s musical works. “The touchstone is not going anywhere, it’s built to last.”

The album is the result of years of work, both the years of a career spent composing and, more recently, the years it took to bring the album into being.

“I have a number of CDs where I’m a composer on a CD with other composers,” Kramer said. “I have maybe six other CDs (like that). That’s usually more typical.”

But while those recordings are nice, they aren’t Kramer’s, he said. Instead, they belong to the orchestra that made the recording.

“I have recordings of every piece (on “Sentinels”), but none was commercially available,” he said. “It was broadcast over radio, but I didn’t own the recording, so I couldn’t post it on a web page or send it to a conductor.

“I know what the pieces sound like, and some of the recordings are really pretty good, but … I thought I’d go for the whole thing and go for an orchestral CD.”

The album pulls its name both from that idea of timelessness and from “Sentinels of the Dance,” a three-part work Kramer composed in 1986.

As music historian and Trinity University associate professor of music Carl Leafstedt mentions in the liner notes for the album, “Sentinels of the Dance” is a “marker” from the start of Kramer’s career that helps show how his style has grown in an “abstract, circular pattern,” with later works evolving yet returning to the principles — the sentinels — of that early piece.

The album’s largest work, “Symphony B-A-C-H,” plays off the name Bach, with each movement focused on a different musical texture — polyphony, monophony, homophony and cacophony.

The first movement in the piece, “BACH meets EsCHeR,” was influenced by Douglas Hofstadter’s Pulitzer Prize-winning 1979 book “Godel, Escher, Bach: An Eternal Golden Braid,” in which the author explores common themes in the works and lives of logician Kurt Godel, artist M.C. Escher and composer Johann Sebastian Bach. It uses concepts of math, symmetry and intelligence to consider how self-reference and rules give meaning to otherwise meaningless things.

Codes and puzzles are a big part of that idea, and Kramer pulls those into his compositions, using the R in “Escher,” for example, to represent the “re” in the musical solfege system — in layman’s terms, think “do-re-mi.”

Among other works on the album are “A Fivescore Festival,” a five-piece work commissioned by the city of Kent, Washington, to celebrate its centennial, and “All in Golden Measure,” which Kramer composed in 2013 for the Jacksonville Symphony Orchestra’s 50th anniversary celebration.

The orchestra got its start at MacMurray College and now performs at Illinois College, so Kramer incorporated bits of both schools’ alma maters into the piece, along with sounds common to Jacksonville — train whistles, cicadas and the racetrack on a summer evening.

While the album has been years in the making, the timing of its completion and release is ideal, Kramer said.

“I have been inching toward slowing down, this year, maybe next year,” he said, noting that he’ll be 61 in July.

The COVID-19 pandemic sped up his timeline a bit, and Kramer is retiring from teaching at IC, though he will continue to work with the college’s Fine Arts Series and still will be around campus in a limited capacity, he said.

He now intends to focus on his composing, and the album is expected to help with that by making his music more readily available to the conductors who might commission a piece or wish to have their orchestra perform a piece he’s already written.

“In this digital age, if you don’t have a recording of your music, it doesn’t really exist,” he said.

Other recordings of his music, the ones he doesn’t own, have been broadcast in such far-flung places as Croatia, he said.

With more and more people streaming music, the conductors and CEOs of symphonies are among them, stumbling on tunes they might not have known to go looking for in the course of listening to XM Radio or a music streaming service, he said.

He was a student in Michigan when a professor of his released an album of his compositions, and it had an impact on Kramer, he said.

“He didn’t do it until his 70s,” Kramer said. “… I always felt it was better to get it done in your 50s or 60s, get more interest in your music while you can still write more music and do workshops and master classes. I’m still interested in writing orchestral music. In that sense, (the album) is an introduction to what I’ve done. … It’s a long-term project and a long-term investment that, hopefully, I will do for the next 20 years or so.”