“Surviving Yourself: Stories of Addiction,” an Illinois College first-year seminar play, will be performed at 2 p.m. Sunday inside McGaw Fine Arts Center’s Sibert Theatre on campus. Admission is free and open to the public. 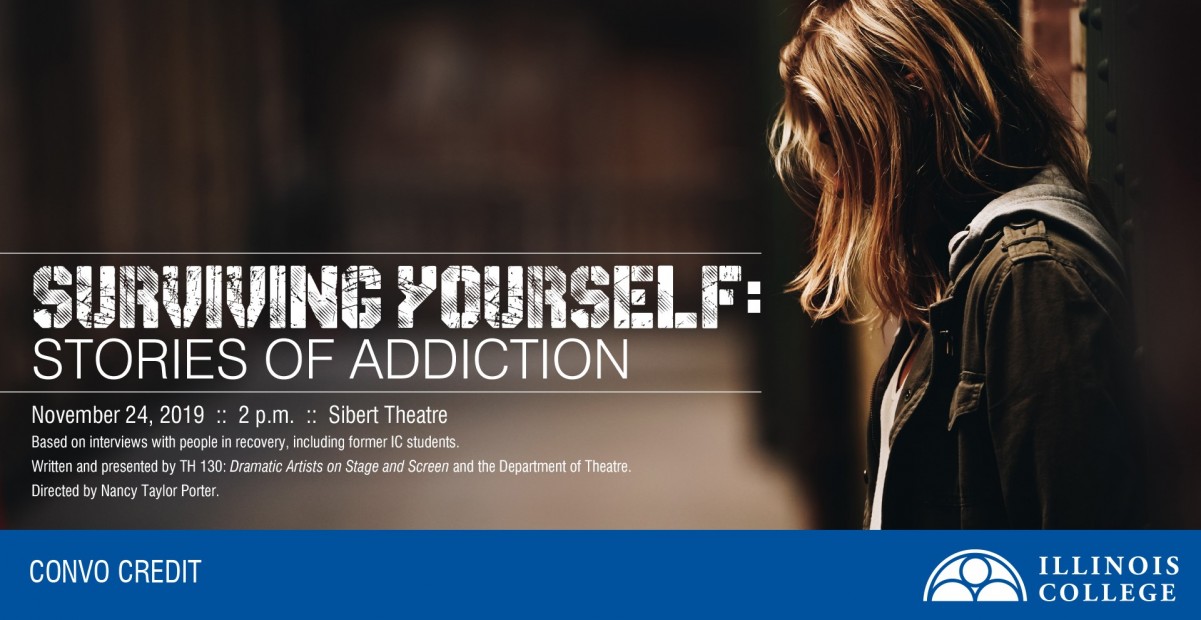 A play started earlier this semester as a class project for first-year students at Illinois College will land on the school’s Sibert Theatre stage this weekend, demonstrating some of what the students have learned in the course of the project and perhaps offering a lesson to audience members.

“For several years we’ve interviewed marginalized groups and given them a voice” on stage, said Dr. Nancy Taylor Porter, an IC theater professor and chair of its theater department.

The program’s first year, students interviewed homeless people in Jacksonville, followed in subsequent years by people affected by racism and Congolese refugees. The last such project looked at the nation’s political divide.

“Students often don’t have any interaction with these people,” Taylor Porter said. Giving them that interaction “increases students’ understanding, and they get to share that with the community. Students who get to do the project tend to find it rewarding.”

This year’s focus on addiction has been no exception, Taylor Porter said.

“Perhaps one of the most important things we learned is that many people who struggle with addiction are just like us,” she said. “It’s just that interacting with certain behaviors or substances has altered their brain chemistry … to drive them down this path of addiction, and resisting that craving is a lifelong enterprise.”

To being the project, Taylor Porter contacted Dr. Elizabeth Rellinger-Zettler in IC’s psychology department, who put her in touch with former IC student Matt Cooley '11, now a professional in the field of substance use and abuse counseling.

“Probably 80 percent of the script is a direct translation, slightly edited, from the transcript of the interviews,” she said. “Everything else is based on the stories they told us.”

The stories were varied — and plentiful.

“I didn’t even get into (the script) everything I wanted, and it runs probably 50 minutes,” Taylor Porter said. “But it’s just great stories and heartfelt expressions of people’s struggles and triumphs.”

They also were a reminder that there is no real “standard” for addiction.

“One person got addicted to pain pills,” Taylor Porter said. “He didn’t have a dark moment and have a realization. He just decided that wasn’t how he wanted to live his life. He had one pill left in the bottle and just decided not to renew the prescription.”

“Someone got a PhD in psychology and studied video gaming addiction,” Taylor Porter said. “There are scenes based on stories he told.”

Others forms of addiction also are discussed, she said.

“Years ago we had themes for first-year seminars,” Taylor Porter said. “The theme that year was ‘service.’ How can theater fit into the concept of service? I came up with the idea of (taking) marginalized voices and (giving) them a voice on stage.

“That idea of theater promoting social justice has been core to my own interest in theater for years. … I’m happy for theater to be entertaining, but this allows (students) to see theater work in the world in a way they might not have seen before.”

“Surviving Yourself: Stories of Addiction,” an Illinois College first-year seminar play, will be performed at 2 p.m. Sunday in McGaw Fine Arts Center’s Sibert Theatre on campus. Admission is free and open to the public.

In the News
Poet processes worry through words
In the News
Scorpion stings, spider bites don’t eclipse professor’s joy for nature
In the News
Library, IC team up to help homeless
Back to top