Illinois College to host Thomas Civil War Conference in May

The Benjamin P. Thomas Civil War Conference will be held at Illinois College on Saturday, May 18. 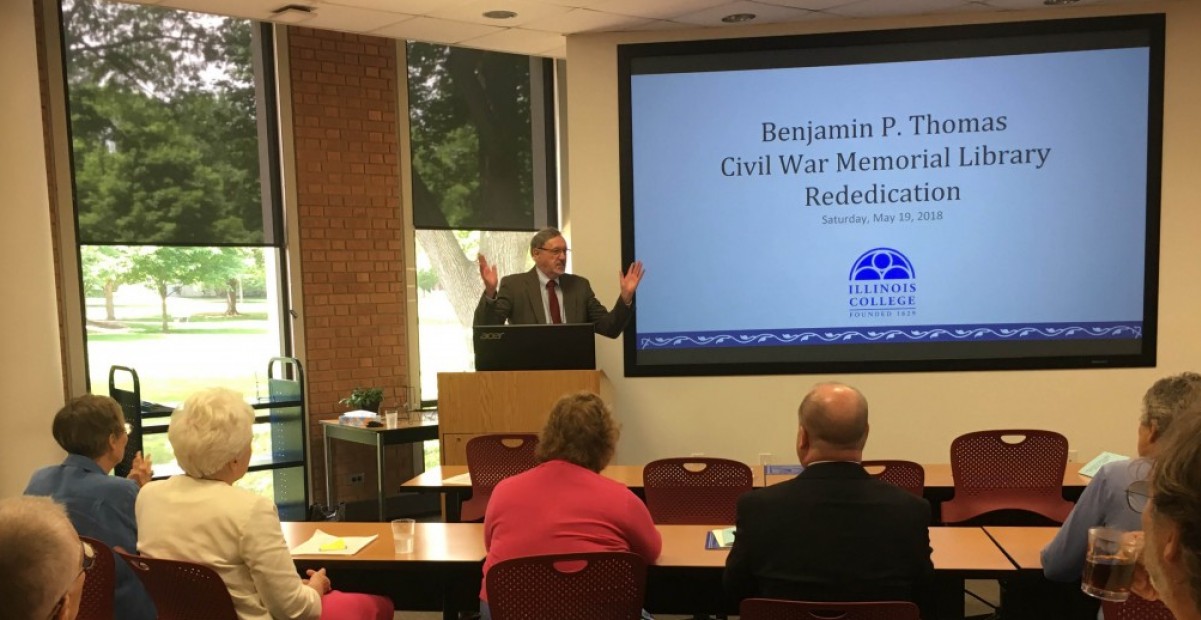 This is the first year for the daylong conference, a collaboration between Mr. Lincoln’s Hometown Civil War Roundtable in Springfield and Illinois College in Jacksonville. The educational event is open to the public and designed to engage casual and dedicated Civil War and history scholars. Organizers plan to make this an annual event.

“Our conference speakers are passionate and knowledgeable about the Civil War. We are honored and excited to bring them to Jacksonville for the first annual Benjamin P. Thomas Civil War Conference at Illinois College,” said Murphy. “The Roundtable and Illinois College share a mutual interest in academic excellence and a passionate commitment to public history.”

Terry Winschel, former chief historian of Vicksburg National Military Park, will present the opening presentation at the conference. Winschel is also the author of several works including “The Civil War Diary of the Common Soldier,” “Vicksburg: Fall of the Confederate Gibraltar,” and “Triumph & Defeat: The Vicksburg Campaign.”

Dr. Timothy B. Smith has recently been added to the line-up. Smith is a lecturer in history at the University of Tennessee Martin and a former park ranger at Shiloh National Military Park. He has authored, edited, or co-edited eighteen books, including "Shiloh: Conquer or Perish, Champion Hill: Decisive Battle for Vicksburg," and more recently, "The Real Horse Soldiers: Benjamin Grierson’s Epic 1863 Raid Through Mississippi." At the Benjamin P. Thomas Civil War Conference, Smith will present a program titled:  “Difficult and Broken Ground: The Terrain Factor of Shiloh”.

The Paul Findley Congressional Office Museum and Schewe Library are co-sponsoring the event. Library director, Luke Beatty, commented, “As a library whose commitment to open-access principles is second-to-none, it is a pleasure and a privilege to support this conference series and all the varied speakers it will bring to Jacksonville and the surrounding community.”

Illinois College student Nely Muñoz ’20 has gained unique hands-on experience assisting with program planning for the conference. Muñoz will serve as a public history intern in summer 2019 with the Khalaf Al Habtoor Archives and the Paul Findley Congressional Office Museum and will help with the conference in May. “I am excited to have hands-on experience preserving and sharing history with the public with this event,” Muñoz said.

According to Samantha Sauer, Illinois College archivist, curator and assistant professor of history, the conference is named for Benjamin Thomas, a historian and well-known writer. She also shared that Illinois College is home to the Thomas Civil War Library Collection, originally given to the College in June 1958 in memory of Benjamin Thomas H’47. Thomas authored a popular 1934 text “Lincoln’s New Salem,” as well as a 1952 biography of Abraham Lincoln, both texts gained success in public and scholarly circles. Sauer said that Thomas was awarded an honorary degree from Illinois College and later served as a trustee of the College. In May 2018, the Thomas family and the Springfield Civil War Roundtable partnered with the College to rededicate the collection.

Continuing education and professional development credit will not be available for the inaugural conference, but conference organizers are already looking ahead to next year’s event to offer this for area educators.

For more information or to register for the 2019 Benjamin P. Thomas Civil War Conference, the public is invited to contact Samantha Sauer at archives@ic.edu or at 217.245.3595. Suggested event donations begin at $25 and all proceeds benefit the Benjamin P. Thomas Memorial Fund at Illinois College to support the future and ongoing study of the Civil War.