IC’s ‘Bridegroom’ a marriage of skills 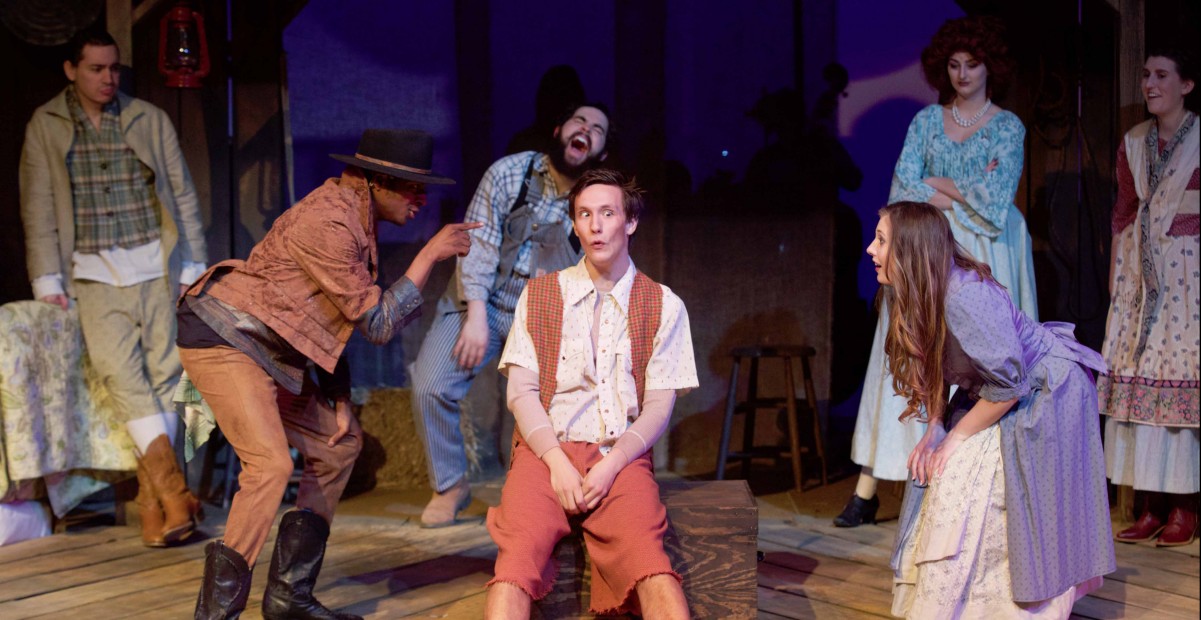 By Angela Bauer, abauer@myjournalcourier.com, for the Jacksonville Journal Courier

“The Robber Bridegroom” isn’t exactly the tale of a perfect marriage.

Behind the scenes, though, director and IC theater assistant professor Aasne Daniels found a solid relationship in working with Becky Kemp and Elizabeth Cheney, to whom she ceded vocal and choreographic control of the musical, which will be staged Friday and next weekend at Illinois College.

Still, the collaboration worked for Daniels, who has done a lot of “musical stuff” but doesn’t have a background in music theory or a degree in music, she said.

It’s also a collaboration of students from IC’s music and theater departments, some of whom had never acted before, she said.

“I think it sounds great, looks great,” she said. “Everybody’s giving it their all.”

The musical is based on the Eudora Welty short story of the same name, which in turn was based on a Grimm’s fairy tale. It tells the story of Jamie Lockhart, a man who prides himself on being a “gentleman robber, stealing with style as he charms folks out of their treasure”. Sometimes, though, he’s “the Bandit of the Woods” and takes whatever he wants by whatever means necessary.

He meets his match in Rosamund, a “spunky damsel in distress,” complete with evil stepmother.

“I stumbled on it,” Daniels said of how she chose it to be IC’s musical. “I was cruising YouTube one night last year, knowing I had to pick a musical … I thought it was really charming and funny, with some dark moments. Then (YouTube) took it down. I told everybody at IC about it, told them they could find it on YouTube, then they couldn’t.”

They ended up taking Daniels’ word for it when she told them it was the musical to do.

They also trusted her thoughts on the play’s dances, even the choreographer.

“It’s written as a square dance-traditional American folk dance-heavy show,” Daniels said. “But I wanted to see if we could shake that up a bit. Using the students as inspiration, we devised a lot of the choreography so it feels very contemporary.”

She’s not quite sure what to call the dance she and choreographer Cheney ended up with, but it’s what she was seeking, she said.

“It’s meta-theatrical, maybe,” she said, trying to find a term for it. “It goes beyond realism into some sort of expressionism. But it works, it enhances the story.”

Starting at 6:30 p.m. Friday, students in IC’s music department will perform in a pre-show cabaret in the Sibert Theatre lobby. IC music instructor Nichol DelGiorno will accompany the students on piano as they perform songs from musical theater. The performance is “casual” and guests are welcome to arrive at any time, DelGiorno said.

In the News
An orchid fit for a queen: IC professor has hand in floral gift for Elizabeth II's Platinum Jubilee
In the News
Walk raises suicide prevention awareness
In the News
IC alumnus shares about his journey to The Second City on NPR Illinois
Back to top