IC play’s monsters not all imaginary

Director Nancy Taylor Porter spoke with the Journal-Courier about “She Kills Monsters,” the spring production of Illinois College TheatreWorks which opens this Saturday. 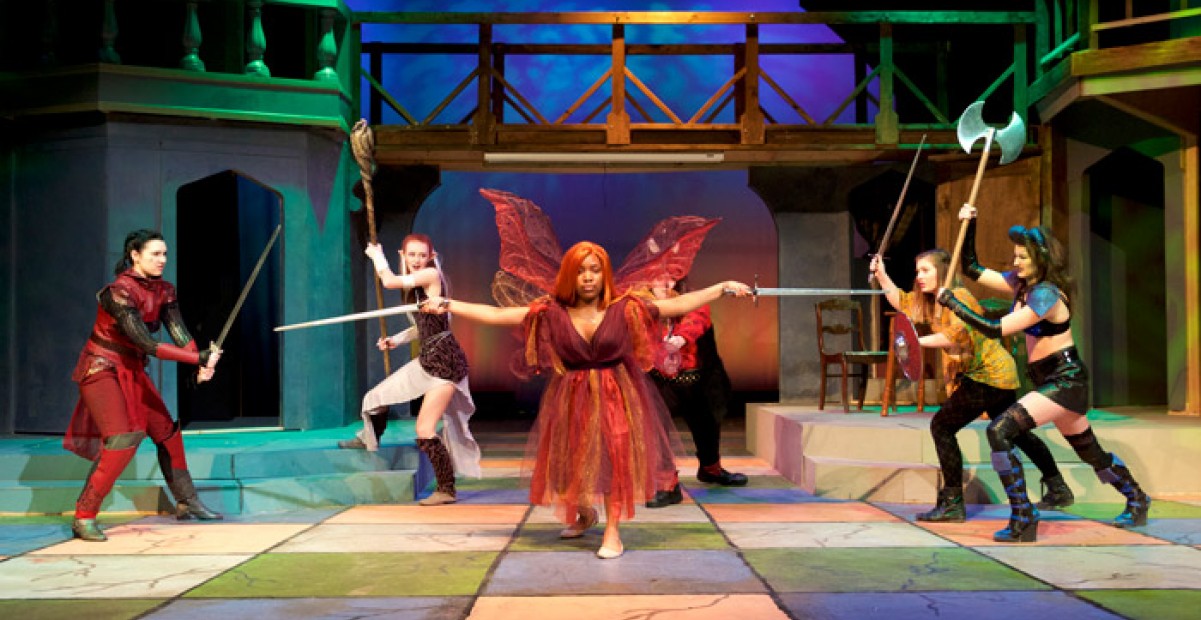 Every time I see it, I’m so moved by the power of it. We had a last run-through before tech … and to hear people just bust a gut laughing and then see them lean forward in their chairs, wiping tears off of their face was breathtaking all over again.
Nancy Taylor Porter, Director and Professor of Theatre

Instead, it’s a blend of comedy and drama that — even after years of thinking about staging it and months of rehearsals — still manages to take director Nancy Taylor Porter’s breath away.

“Every time I see it, I’m so moved by the power of it,” Porter said earlier this week, ahead of Saturday’s opening of the play at IC’s Sibert Theatre inside McGaw Fine Arts Center. “We had a last run-through before tech … and to hear people just bust a gut laughing and then see them lean forward in their chairs, wiping tears off of their face” was breathtaking all over again.

It was that power that caught Porter’s attention the first time she saw it staged, at Western Illinois University, and continued to hold it when she saw it a second time, at Illinois State University.

The play tells the story of sisters Agnes and Tilly. The more outlandish Tilly died in a car crash along with the rest of Agnes’ family after perfectly average Agnes wished for her own life to be less boring. In going through Tilly’s things, Agnes finds a notebook that turns out to be a Dungeons & Dragons game module that her sister wrote.

The sisters weren’t close when Tilly was alive — both of them allowing barriers to build and Agnes, at least, assuming they’d crumble on a someday that never arrived — and Agnes decides to try to get to know her sister better the only way she now can — by playing the game module, in which Tilly and Agnes are both characters.

“As (Agnes) gets to know her sister more and more, you feel like her heart just enlarges,” Porter said. “She comes to understand and care for her sister in a way she never did while she was alive. … When she understands who Tilly is, she comes to love and accept her.”

With the play itself sliding between a Midwest high school setting and a Dungeons & Dragons quest setting, the actors have been challenged, especially by the stage combat skills required for the various D&D fights, Porter said.

“There are 17 instances of violence, some of them going on for two or three minutes,” Porter said, noting that the extent of stage combat was her one hesitation in bringing the play to the stage. “… You’d have to come three or four nights to get in (all the details) of all of the fights.”

Illinois College TheatreWorks presents “She Kills Monsters” at 7:30 p.m. Saturday in McGaw Fine Arts Center’s Sibert Theatre on the IC campus. Other showtimes are 7:30 p.m. March 28-30 and 2 p.m. March 31. The play contains adult language and themes that may not be suitable for children.

A pre-show cabaret reception featuring performances by members of IC’s music department will begin at 6:30 p.m. Saturday in the theater lobby.

Admission is $10 general admission, $5 for students. Tickets are available online at ic.edu/theatre/tickets, by calling 217-245-3471 or by email at illinoiscollegeboxoffice@gmail.com.

In the News
Poet processes worry through words
In the News
Scorpion stings, spider bites don’t eclipse professor’s joy for nature
In the News
Library, IC team up to help homeless
Back to top