“I’ve been stung by scorpions, bitten on the neck by giant water bugs, and bitten by giant spiders in trees,” Hitchcock Professor of Biology Lawrence Zettler said. 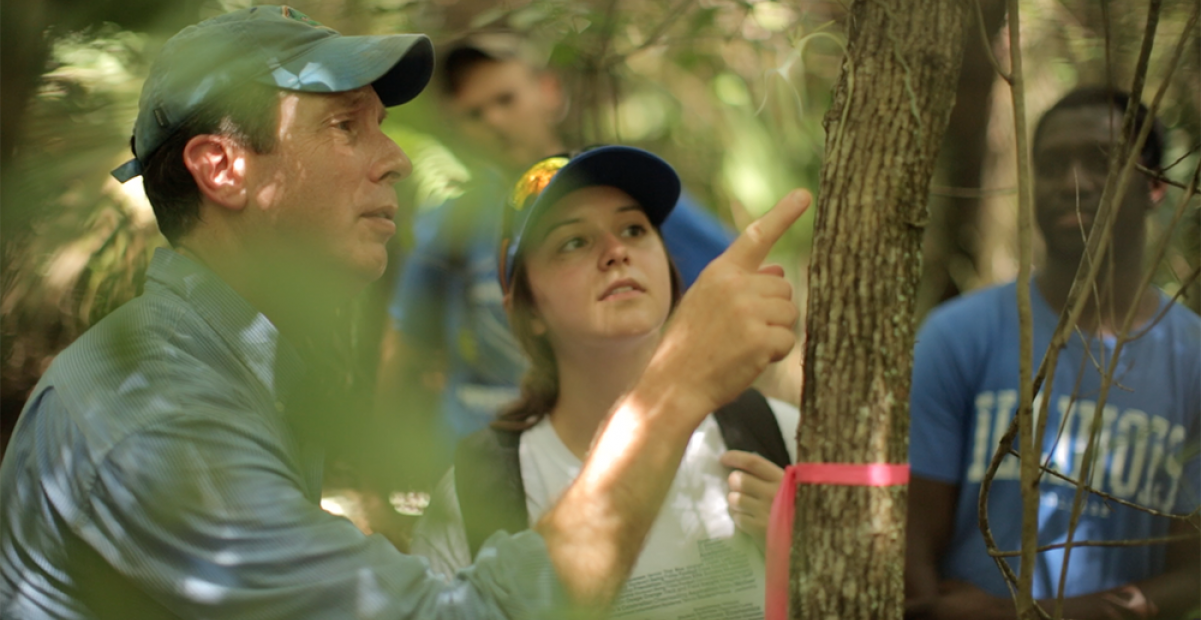 Lawrence Zettler has suffered for his career.

“I’ve been stung by scorpions, bitten on the neck by giant water bugs, and bitten by giant spiders in trees,” Zettler said. “I’ve licked my wounds, but overall it’s been a wonderful experience.”

The 56-year-old Zettler is the Hitchcock Professor of Biology at Illinois College and since 1996 has inspired Hilltop Campus students to look at the smaller parts of the natural world, including those that bite and sting. Some bite harder than others.

“There’s some crazy show on one of the TV stations where they get bit by things, and one of the insects on the show was one that I have been bitten by, a giant water bug,” Zettler said. “The ones they were trying to get bitten by on the show were puny compared to the one I got hammered by on my neck.”

“The pain is excruciating,” Zettler said. “If one lands on you and you try to push it off, they will grab you with their front pincer-like legs, bring their beak up to your skin, and deliver a saliva that feels like someone has taken a hot poker and held it on your skin for a minute. And then it itches for about a week and feels hot.”

Zettler said that like anything else in life, a few bad, biting bugs can ruin the reputations of the numerous beneficial and simply beautiful insects that pollinate crops, help to feed other animals, and control pest species. To emphasize his point, Zettler proudly displayed the college’s butterfly and moth collection that contains some of the most stunning colors on earth.

This combination of danger, beauty and purpose has fascinated Zettler since childhood, spurred by parents who encouraged their young son to explore and appreciate the natural world.

“I would just run outside and see things and catch things with nets, and I would drag them home and show my folks,” Zettler said. “So this kind of happened naturally, it’s sort of been in my DNA.”

Zettler was born in Ithaca, New York, and grew up near Gainesville, Florida, where his father was a professor of plant pathology and virology at the University of Florida. South-central Florida was a great place to find insects of all varieties, and rather than trying to kill every insect, his parents encouraged Zettler to understand the creatures’ miniature world. That appreciation determined Zettler’s career path.

Zettler earned a bachelor’s degree in agriculture with an emphasis on insects from the University of Florida, where as an undergraduate he was privileged to work with the “dragonfly expert of North America” for three years drawing dragonflies that they would catch in canoes. The color drawing technique that Zettler learned from his mother led to a book that was published in 2000, “Dragonflies of North America,” that contains his illustrations.

Zettler earned his doctorate from Clemson University and spent several years there, doing groundbreaking work on rare orchids that continues to place him in the national spotlight. Zettler was a visiting professor at Furman University in Greenville, South Carolina, when he received a phone call from Illinois College in the mid-1990s asking if he would like to interview there.

“It’s nice here at Illinois College because you can develop the courses the way you want, like the courses we teach in Costa Rica and Cuba inspired by travels I took years ago,” Zettler said. “It’s rewarding when students see something for the first time and they get confidence in understanding what it is, they learn to respect it, and a lot of them end up doing very good work for the natural world after they graduate.”

The students appreciate Zettler’s field trips, even the ones that go just a few blocks away from campus, like the grounds of the Bob Freesen YMCA.

“I told my students they might want to lift up some decomposing logs, and sure enough, there was what’s called a Pleasing Fungus Beetle,” Zettler said. “They are beautiful, they are black and red and shiny, almost like somebody took nail polish and coated the wings. It was rather large, as big as your thumbnail, and the students got excited.”

“Catching dragonflies is almost a sport. They circle over your head and they see very well, and if you’re not fast the first time, they’ll learn from their mistakes and fly away,” Zettler said. “You have one shot, but occasionally a student will bag one, and when they look at the abdomen it’s an incredible blue and the students really do see the beauty of these insects.”

Zettler’s bug bucket list includes seeing a rare predatory caterpillar in Hawaii and the spectacular Birdwing Butterfly in New Guinea, and he feels privileged to have seen rare and unusual insects all over the world, including “some incredible insects” in Madagascar. He said there’s a little-known secret to encountering the insects you seek.

“You really can’t go out looking for them, they come and find you,” Zettler said. “And then you just say, ‘there you are.’”

Zettler wants his students to realize that there is an extinction going on all over the world with respect to insect and plant diversity, and it’s a chain reaction because “when the insects start to fall, the other dominoes will start to fall,” Zettler said. “But the good news is that nature is very resilient if you give it a chance to come back.”

Zettler hasn’t identified any new insect species, but has discovered two new fungi species, one of which he will name after his daughter because its culture is pink, which is his daughter’s favorite color. His daughter, by the way, has been “bitten” by the insect bug and also likes to collect the tiny creatures.

If his undergraduate focus on insects hadn’t panned out, Zettler planned to join the U.S. Air Force because he loves flying and was a young member of the Civil Air Patrol. But he’s never looked back, unless you include that encounter with the insect he dislikes the most.

“I was paddling in a canoe, heard a slight spritzing sound, and then my eyes started to go numb and got very blurry, and I had to put the paddle down and just drift,” Zettler said. “About 30 seconds later I began to see a little bit better, so I went back, and it was a six-inch walking stick. They have the very good ability to shoot a jet of spray off the sides of their bodies toward eye spots as a defense against predators.”

“I just happened to be the victim, I got close to it in a canoe and I didn’t know it and it got me,” Zettler said. “To this day, when I see a walking stick, I just don’t want to bother them.”

In the News
Library, IC team up to help homeless
In the News
Student who studied in Puerto Rico says residents need support
In the News
First-year seminar play gives voice to marginalized people
Back to top