A person’s taste in music or reading material can provide a glimpse of his or her personality. An Illinois College student is offering theater-goers much more than a glimpse this weekend, directing a play he wrote about just what goes on in his own head. 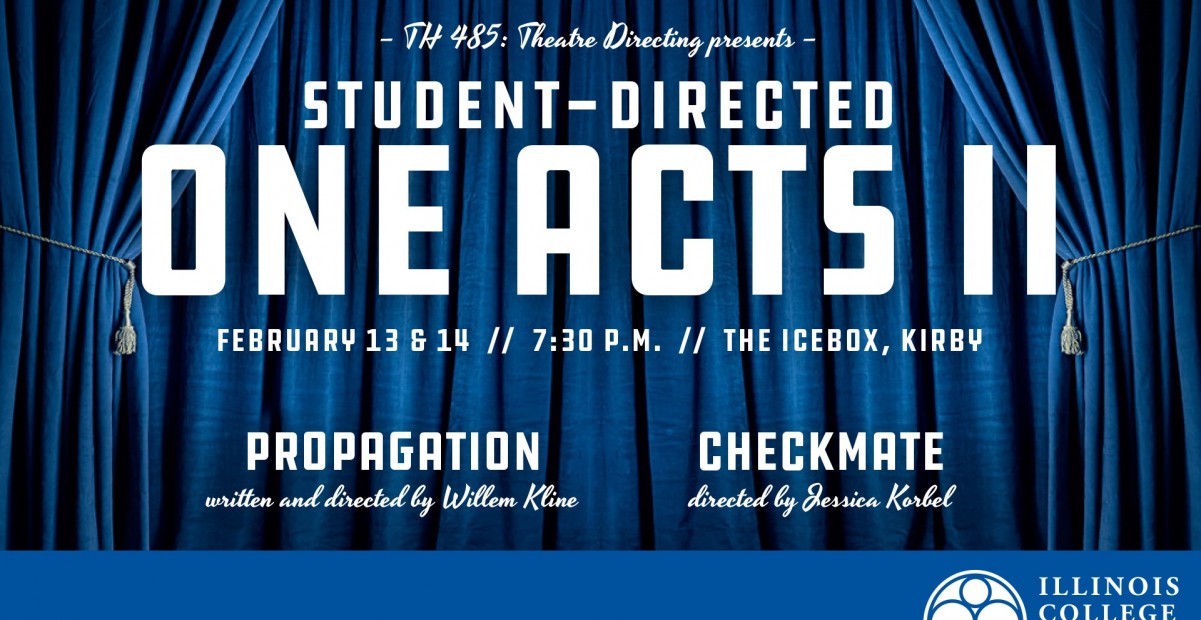 Head trip: Student playwright invites audience along on journey into his mind, by Angela Bauer, Journal-Courier

“It’s a reflection on the four years I’ve spent at college, how liberating it’s been but also how isolating it’s been,” Belvidere senior Willem Kline '20 said of his play, “Propagation.” “There’s moments of intellectual freedom and moments of emotional and social isolation. Stark contrasts.”

Directing a one-act play is a requirement of a directing course IC offers to its theater majors their senior year, and Kline started thinking about writing “Propagation” as a junior, he said.

“I was lying down in my bed one day, a long weekend,” he said. “I had just gotten back from a party with my friends and thought, ‘Man, I have to leave here soon. What am I going to do?’ That moment was very anxiety-inducing, but I also (recalled) a lot of memories of IC and my childhood.”

Kline’s thoughts that long weekend served as the seed for a play.

“I wrote 20 pages and realized it wasn’t going anywhere,” he said. “I had to cut and scrap it. I didn’t want to make something that was a direct translation of my life, so I made it a science fiction romance set 100 years in the future.”

The premise is the lead character is “emotionally celibate” after years spent overseeing a torture chamber-style isolation room.

“He has to speak to (artificial intelligence) to figure out what it means to be human, how to be a normal human being at the end of the day,” Kline said.

It toys with the concepts Aldous Huxley explored in the novel “Brave New World,” Kline said.

Kline has wanted to be a filmmaker since he was a child, he said, adding that he believes the easiest way to get there is to start by writing his own scripts. Instead of going to film school, he chose IC’s theatre department as a way to learn about acting and staging.

His play, though, is heavily influenced by his love of cinema, complete with a soundtrack, he said.

And while he believes he’s written and is directing something that achieves the goal he set for himself at the start, he admits to having mixed feelings about it.

“I’m anxious about it,” Kline said. “… Seeing everything come together at once (during a recent rehearsal), I started breaking down and crying. Other times I think, ‘This is a terrible play, I don’t know if I should put it on.’

“I’m not a very ‘personal’ person. I have a lot of vulnerability when I write. But I never share about myself. This is the first time that I’ve written a piece that’s thoroughly reflective about what I see.”

“Propagation” and the one-act play “Checkmate,” directed by IC senior Jessica Korbel '20, will be staged Thursday and Friday at Illinois College’s ICEBOX theater inside Kirby Learning Center on campus. Doors open at 7 p.m. with curtain at 7:30 p.m. Admission is free.