Many students describe their years at Illinois College as a time to broaden their horizons and have experiences that cultivate greater global and cultural understanding. 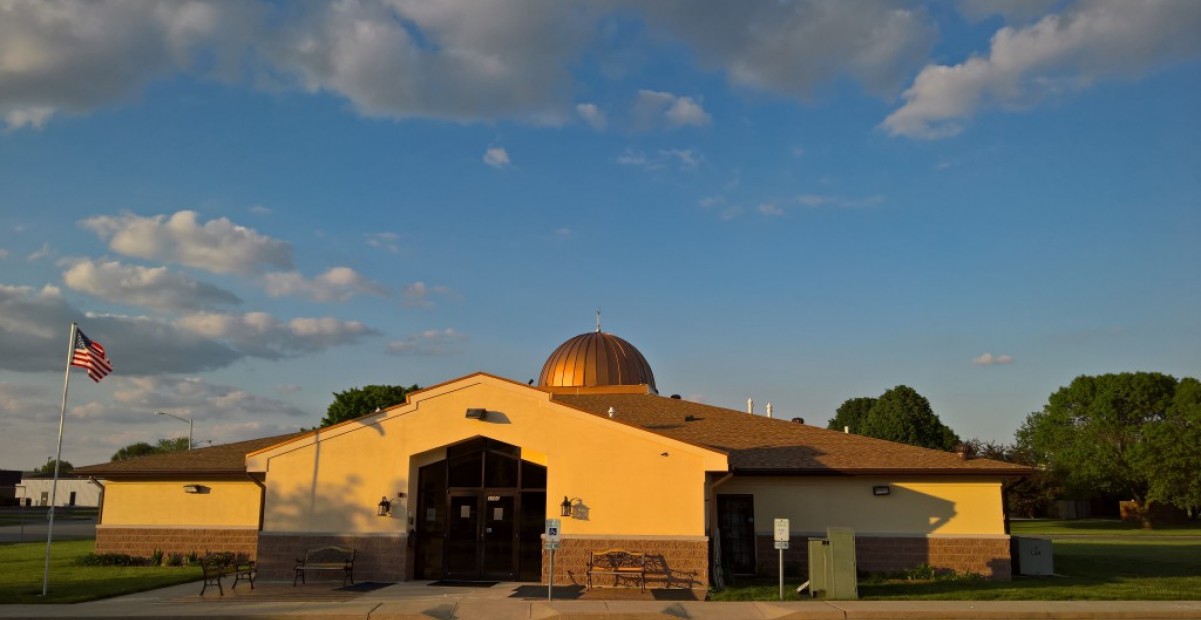 Those life-changing experiences can occur when students travel for study abroad or global BreakAway trips, but as students in a world religion class recently learned, making local connections can also have a deep impact.

That was the purpose of a recent class trip to the Islamic Society of Greater Springfield. The class is taught by Paul Spalding, Scarborough Professor of Religion, and serves to introduce students to important religious traditions that have emerged from the Middle East (Judaism, Christianity, Islam), South Asia (Hindu, Buddhist, Jain, Sikh traditions), and East Asia (Confucianism, Daoism, Shinto).

While students study religious readings and have discussions in the classroom, being immersed in places of worship is meant to illuminate what they have learned, giving them greater context for understanding of a variety of religious traditions.

Spalding said that the practice of bringing students to the Springfield mosque as part of religion studies started about a decade ago, when Dean of Students Adam Porter, professor of philosophy and religion, first brought his class to visit the mosque. Since then, ISOGS has become a learning destination for many other religion courses.

Spalding traveled with 18 IC students to Springfield on the last Friday in September. Once at the center, Dr. Ali Nizamuddin, president of the Islamic Society of Greater Springfield and a professor of political science at University of Illinois Springfield, led a discussion and students participated in religious traditions, like ritual prayer.

According to Spalding, Nizamuddin was an excellent guide, described as a “brilliant, strikingly articulate man who is intent on promoting a positive dialogue with other faiths and culture here in Illinois and throughout America.”

No previous study of religion is required for the introductory course, so students often have varying levels of religious understanding. After the trip, students are asked to contemplate the meaning of their experience and how it changed their previous perceptions in a reflective essay.

Overall, responses show each student took away something valuable from the experience. Some were surprised at how welcoming their hosts were, encouraging questions and providing a lunch of various South Asian and Middle Eastern dishes, ranging from chicken dishes to baklava. Others were surprised at how many current world issues were discussed in relation to Islam.

Student responses included phrases like “they encouraged people attending the prayer service to get involved in society’s problems in a positive way,” “the amount of diversity among people was different than I expected,” “the trip opened my eyes to a culture I had never experienced; I learned a lot of my previous perceptions were wrong” and “observing the shared prayer and seeing people practicing their religion taught me more than just being given the information.”

Nia Odeoti-Hassan, a professor emerita, and Baker Siddiquee, a professor of economics at University of Illinois Springfield, also spoke with students during the visit.

ISOGS is a religious, non-profit organization founded in 1981 and is located in Springfield, Illinois. It is the only masjid, or mosque, within 50 miles and serves as a community center for Central Illinois.

Student’s in Spalding’s world religions class will visit a Sikh temple in Decatur later this month.