Members of Alpha Phi Omega were led by Olivia Frichtl ’22 on Monday during a walk to raise awareness about suicide prevention. 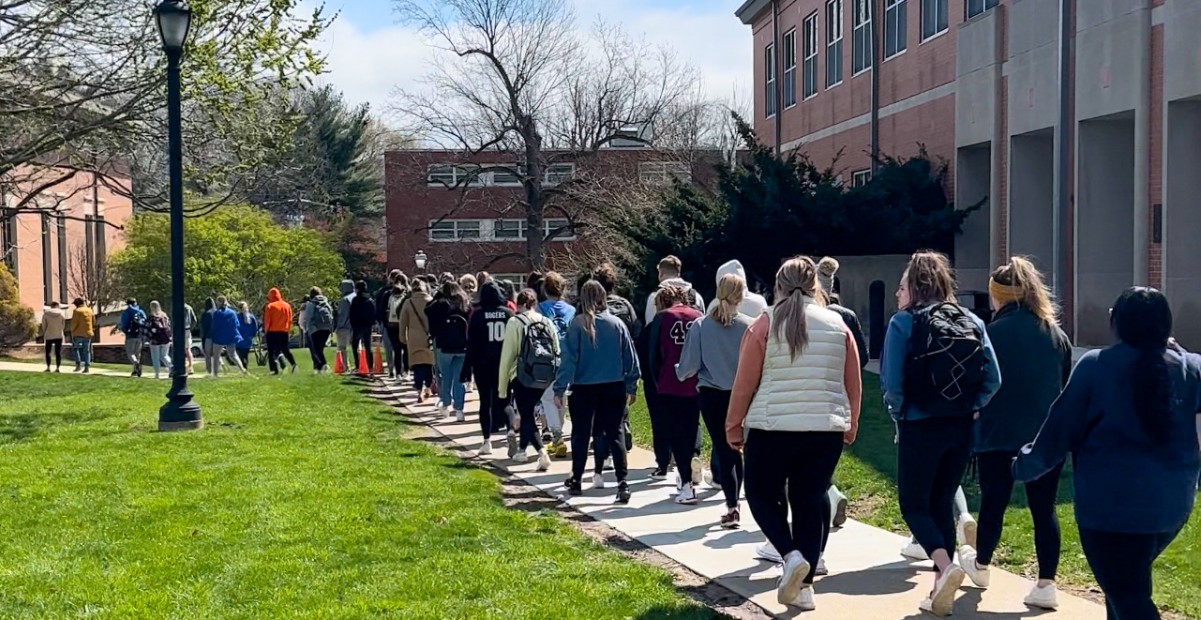 This article appeared in the Jacksonville Journal-Courier on April 19, 2022.

Members of Alpha Phi Omega gathered Monday morning for a walk around the college's upper square to raise awareness for suicide prevention.

The walk was organized by Illinois College senior Olivia Frichtl, who said she wanted to hold the walk after losing her sister to suicide in 2019.

“For a long time, mental health wasn’t something that we talked about,” she said. “And, even with my sister’s passing, it was still kind of something where people didn’t know what to say or how to react. So, by bringing more awareness to it, we can have prevention.”

Staff from the school’s Chelsey Health and Wellness Center also attended the walk, reminding participants that free counseling services are available to any IC student who needs them.

Suicide is the 10th-leading cause of death in the United States and the 11th in Illinois, according to the Illinois Department of Public Health. Between 2018 and 2020, the suicide rate in Illinois went down by 7%, though it climbed among certain demographics, including African Americans and 18- to 24-year-olds. The Illinois General Assembly has drafted legislation that, if signed, would require schools to provide students with information on where in the state they can find mental health resources.

Frichtl said she wants anyone who is struggling with their mental health to know that they are not alone.

“I think a lot of times people feel like they’re alone in it,” she said. “And I think the biggest message is that you’re not alone. There’s lots of people that want to help you and will help you.”

In the News
IC alumnus shares about his journey to The Second City on NPR Illinois
In the News
Neighbors: IC student's love of music transcends countries and cultures
In the News
IC sociology student provides assistance at local library
Back to top