During her time at Illinois College, senior Meghan Ruyle ’19 has packed her resume with hands-on experiences and impressive accomplishments. 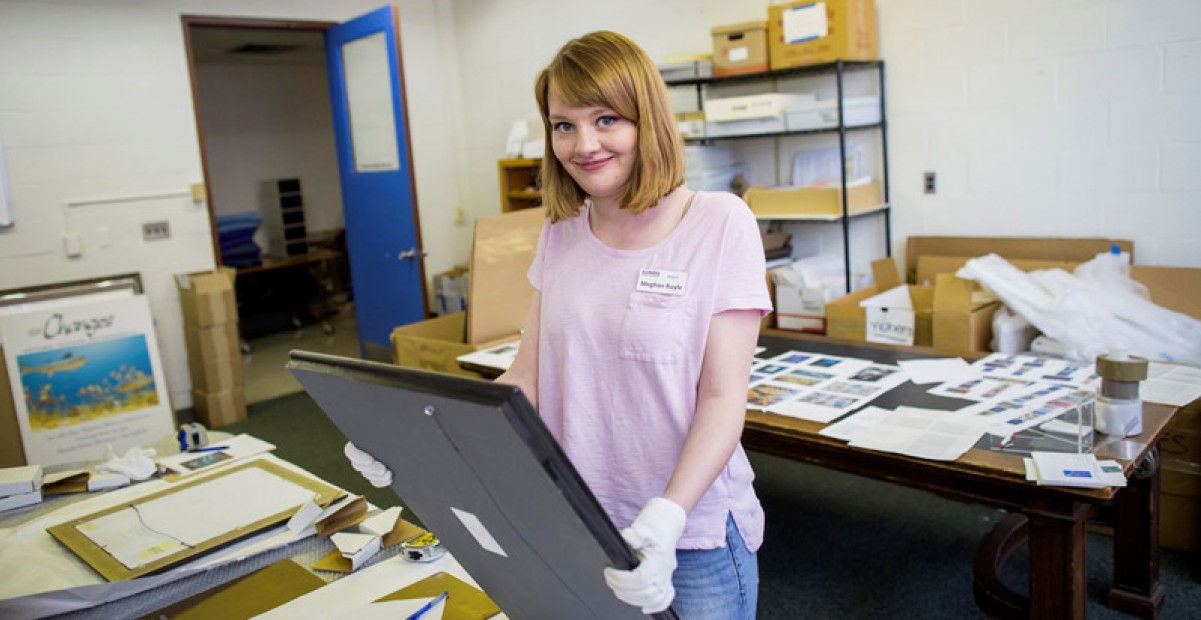 To have my work acknowledged by individuals within my field of study is incredibly rewarding. Throughout my time at Illinois College, I have kept the mentality that with hard work, comes success. This acceptance really solidified that belief for me.
Meghan Ruyle ’19

Last week, Ruyle gained another achievement to add to her growing list.

On February 13-16, the Jacksonville native traveled to New York City to present her research at the 107th Annual College Art Association Conference. CAA is an international leadership organization in the visual arts which advocates for artists and diversity in the field.

Ruyle’s  proposal was one of the few undergraduate projects selected from a record-breaking 900 submissions, and she will be among an anticipated more than 5,000 scholars and art professionals to attend the conference. When Ruyle learned her proposal had been selected, she was overjoyed.

“To have my work acknowledged by individuals within my field of study is incredibly rewarding,” she said. “Throughout my time at Illinois College, I have kept the mentality that with hard work, comes success. This acceptance really solidified that belief for me.”

Ruyle’s work entitled, “Peggy Guggenheim during World War II: Preserving a Generation of Art,” is a research project that explores the life and accomplishments of Peggy Guggenheim, curator of the first all female art exhibit in 1943.

“I was inspired by Peggy and her humanitarian efforts and wanted to give her recognition in a way that celebrated her many accomplishments, “ she said.

Ruyle’s research chronicles Guggenheim’s efforts to salvage many valuable works of art in occupied France during World War II. Her research is largely focused on the societal forces that Guggenheim worked against due to the rising power of Adolf Hitler and the German Reich. At the time, many viewed modern art as “degenerate.”

Assistant Professor of Art Matthew Mogle is among those at Illinois College that have witnessed Ruyle’s hard work and dedication as a student and researcher.  He said her limitless curiosity for art and learning has always been evident in the depth of her work.

“Meghan consistently challenges herself beyond the classroom,” said Mogle. “Given her trajectory as a student, we were not surprised that she was invited to the CAA to present her research.”

Growing up, Ruyle said she never considered making a career in art; she didn’t even take an art class until her senior year at Jacksonville High School. Her passion for art was sparked during her first-year seminar at IC.

“That class incorporated art theory, art history and writing. Near the end of the semester, my professor approached me and said he thought I needed to be an art history major. It made a lot of sense. I love reading and writing about this subject. I have been on that path since I came to IC,” she said.

While there is no specific major in art history offered at IC, Ruyle worked one-on-one with advisors to customize a plan that allowed her to explore her passion for the field, majoring in art with a minor in history.  She has had multiple opportunities to apply her classroom studies to the real world, completing internships at the Illinois State Museum, Springfield Art Association and the Governor Duncan Mansion.

As Ruyle aspires to a successful career in the art world, possibly as an art curator, she is grateful for the support she has found on her journey.

“I don’t think I would be studying art history if I hadn’t come to IC,” said Ruyle. “Having people that believe in me at Illinois College has given me the confidence to do what I love.”