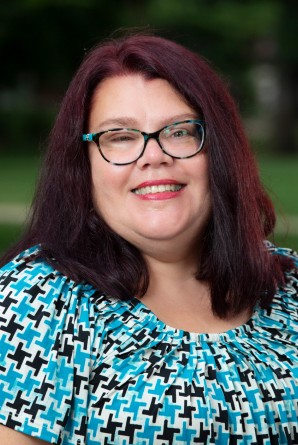 Dr. Marek studies Early Modern Spanish literature. She has published on Cervantes and the Spanish pastoral book or libro de pastores. These early novels, extremely popular in the late-sixteenth and early-seventeenth centuries, feature erudite and noble, stylized, literary shepherds and shepherdesses, who take advantage of their idyllic surroundings to discuss philosophy and lament their tales of frustrated love. Dr. Marek is particularly interested in the intersection of these books and the booming Merino wool trade, which drove Spain's economy at this time. She has spent time with present-day Merino flock owners in León and Extremadura and researches 16th-century herding practices. Her teaching interests also include Medieval literature, Spanish language, and translation.

I have had some wonderful experiences with students in Spain, Germany, France, Cuba, and Bolivia. In the summer of 2017, with my colleague Dr. Diana Grullón-García, I spent three weeks with students in Bolivia, where we worked together in the Jardín Botánico Martín Cárdenas in Cochabamba. When we weren't moving dirt, separating rocks from soil, or transplanting native species in the nursery, we traveled to La Paz, to Lake Titicaca, to the salt flats of Uyuni, hiking (at extremely high altitudes) to indigenous ruins.