The archival donation by the family of Henry Caldwell '17 will provide hands-on opportunities for students for years to come. 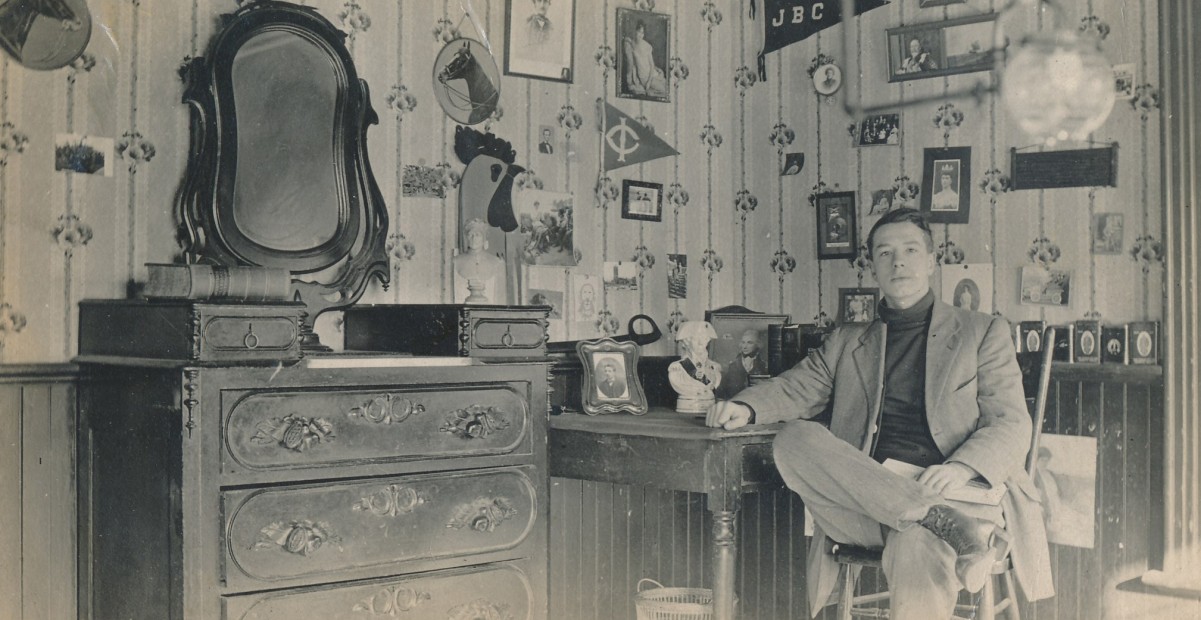 Earlier this month, Elizabeth Aldridge, of Jacksonville, and her family visited for a behind-the-scenes tour of the Khalaf Al Habtoor Archives at Illinois College. The visit was planned in conjunction to view a recent donation to the archives.  Aldridge donated a unique historic collection of material related to the life and work of her father, Henry Caldwell (1892-1938).

Henry Holland Caldwell was a graduate of Whipple Academy and Illinois College in 1917. Born in Manchester, England, Caldwell was active in a range of academic and extracurricular pursuits while on the Hilltop, all of which are carefully documented in letters and photographs in the collection. As a student Caldwell served as a charter member of the Dramatic Club at IC, his English accent setting him apart as he actively participated in a range of Shakespearean productions. In addition to early twentieth century college theatre productions, the collection provides insight into campus life, dining, literary societies, dances, and, of course, homework and studies. Caldwell also served as an editor of The Rambler, was an active writer and poet, and later served as the first editor of the Alumni Quarterly. He would go on to teach English at IC before later joining the faculty at the University of Florida.

The collection contains photographs, correspondence, and ephemera from Caldwell's time as a student and instructor at Illinois College. The materials also includes his letters written while serving with the Canadian army during the Great War, as well as courtship letters to his future wife, Margaret Irving, who also attended Illinois College.

Samantha Sauer, the Illinois College Archivist, Curator, and Assistant Professor of History noted that the materials were a valuable contribution to the collections.

“This is an incredible resource for current and future Illinois College students and researchers. There are many ways that these primary sources will help support coursework, student-faculty collaborations, and research.”
Samantha Sauer

She went on to note that the collection had been well cared for by family and friends through the years, mentioning that friend of the family and caregiver Janet Mitchell contributed greatly to the care of the collection. While the materials come to the archive well-organized, there is still much to do to process the materials to help long-term preservation and access for researchers. “We have a wonderful team of Archive Student Assistants who will gain, apply, and hone skills handling and processing this collection,” Sauer mentioned. Archive Student Assistants are paid student work positions offered in the Khalaf Al Habtoor Archives and Paul Findley Congressional Office Museum.

For more information on the Khalaf Al Habtoor Archives and the student work program, contact Samantha Sauer at samantha.sauer@ic.edu.

Elizabeth Aldridge (left) and family visit the Khalaf Al Habtoor Archives at Illinois College in July 2018. Selections from the recent donation on display.
1 of 3
Henry Caldwell in a Crampton Hall dorm c.1912. In letters, Caldwell occasionally referred to the building as "Crampy".
2 of 3
Henry Caldwell on the steps of Sturtevant Hall c.1915. The collection includes additional photographs and descriptions of the campus at Illinois College.
3 of 3