Michael Shereda ’19 has received a Fulbright Scholarship, one of the most prestigious and competitive fellowship programs in the world. Through the Fulbright U.S. Student Program, Shereda will travel to Germany this fall to serve as an English teaching assistant in a German school for one year. 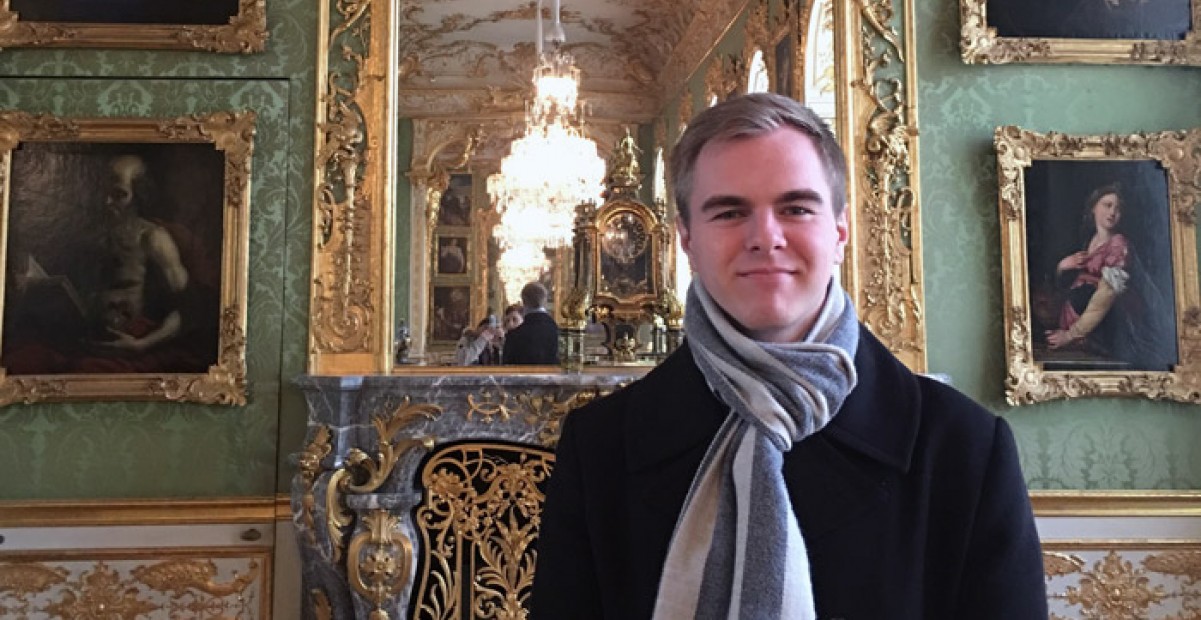 “I was in the library when the email arrived. I saw that it said 'congratulations' and I dropped the phone. I immediately shared the news with my family, friends and professors — it was a big sense of relief and joy,” said Shereda, a senior international studies and dual languages (Spanish and German) major.

Shereda said the accomplishment was the culmination of many years of hard work and the realization of a dream that began in the local library in his hometown of Riverton, Illinois.

“My study of languages started as a hobby. My school only offered Spanish, but at the time I was more interested in less widely-taught languages. I went to the village library and I got books on Dutch, Welsh, Portuguese, all of these languages. I would just sit in my room and read through the books and listen to the tapes,” he said.

Eventually Shereda relented and enrolled in a Spanish class during his senior year of high school, his first formal foray into language studies. He recalls an encouraging teacher helping him to catch up with others who a four-year advantage in studying the language. During that time his mother took him to a local Mexican restaurant to practice with native speakers. That experience transformed his hobby into something much bigger.

“That moment that I was able to connect with people and express myself in a new way — that was what hooked me. That was five years ago. Even today, I go back to that restaurant whenever I'm home and catch up with the owner. It’s those moments that have made me love languages,” said Shereda.

For any student, being selected for the Fulbright would be a huge accomplishment, but for Shereda, a student for whom the prospect of even attending college seemed tenuous at one time, the achievement is even more remarkable.

“When I was in high school, the thought of going to college at all was a far off dream. We didn’t have the money for it,” said Shereda, who recalls his first visit to Illinois College was as a candidate for the Trustee Scholarship, a prestigious and competitive full-tuition scholarship offered to only the top scholars in each class.

It was on that visit that Shereda first met Dr. Almut Spalding, director of global programming and professor of world languages and cultures in German. Dr. Spalding was Shereda’s assigned interviewer in the scholarship selection process.

“I sat down in her office and we talked about languages and travel. She told me about all of the opportunities IC offers for study abroad, something I had been hoping to do for years,” said Shereda. “It was just — it felt incredible. I felt that I could have the experience here that I was hoping to have. Almut made me feel as though that was something that I could achieve.”

A few weeks later, President Barbara A. Farley called with news that would forever change the trajectory of Shereda’s life. He had been awarded the Trustee Scholarship to study at Illinois College. “It was an immediate sense of joy. It was the realization that my dream was possible — probably one of the best moments of my life,” he recalls.

From there Shereda’s journey at Illinois College began. Some of the highlights of his time at IC include taking Spanish and German language courses, his involvement with the music department and choir, and engaging in service-learning projects during a class trip to Puerto Rico. The most meaningful experience for Shereda came in the spring semester of his junior year when he was able to spend a semester in Heidelberg, Germany, a goal for him since his first day visiting Illinois College.

When I look back at my whole experience here at IC, it’s really seeing it as before and after study abroad. I'm sure everyone says that, but it really was the most formative experience of my life so far. Finally going abroad for the first time and getting to live in another language everyday — it was just paradise.
Michael Shereda '19, Fulbright Scholar

During his time abroad, Shereda honed his language skills, practicing various languages with friends from all over the world. Through his passion and dedication to study, Shereda mastered German and Spanish and is nearing that level in French. He’s also learned some Swedish from a friend he met during his time abroad.

Shereda first learned of the Fulbright Program from classmates Gabrielle Esparza ’16 and Christian Flores ’18, who were each awarded the selective Fulbright in previous years. Esparza was selected in 2016 and spent a year in Argentina. Flores won in 2018 and is currently teaching in Brazil through the program. Shereda says the encouragement of classmates who had been through the experience, and faculty who were able to lend their expertise in editing drafts and preparing him for interviews, made a huge difference. He specifically cites Dr. Almut Spalding; Dr. Karen Dean, Go! Program advisor, Dr. Diana Grullón-García, assistant professor of Spanish, and Dr. Christopher Oldenburg, associate professor of communication and rhetorical studies, as playing a key role in his success at Illinois College and in his successful application for the Fulbright award.

Shereda is looking forward to representing the United States in a positive light and “building bridges between people and cultures through language” as a Fulbright scholar. He also hopes the experience will prepare him to achieve his next goal: completing graduate school and possibly taking the foreign service officer test to become a diplomat. He is confident that his language skills and the lessons he learned at IC will serve him well.

"I am working towards a career that allows me to travel and use language to further communication and cooperation at the international level,” he said. “I believe that the education I have received at Illinois College and the amazing experiences I have had during my time here have prepared me well to pursue my goals."