Collaborative research projects are nothing new for Adrienne Hacker Daniels and Christopher Oldenburg, longtime faculty in communication and rhetorical studies. 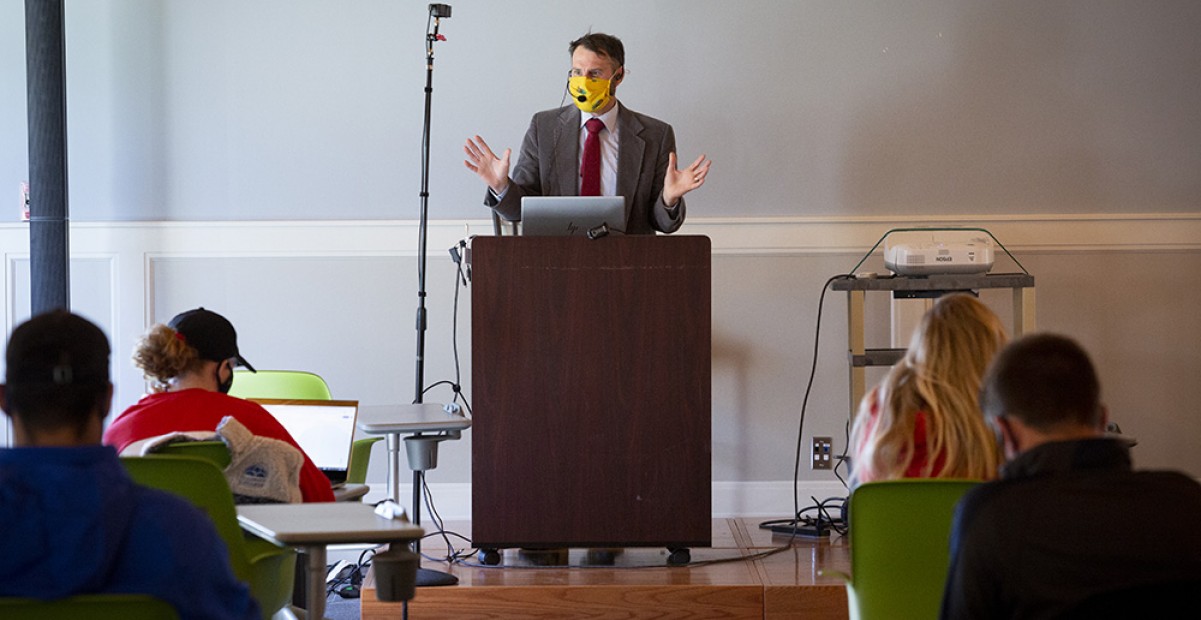 Their work has helped elevate Illinois College and the department, which has taken a unique approach to educating students in the major that sets them up for success in a wide array of fields. Hacker Daniels, who is the A. Boyd Pixley Professor of Humanities and professor of communication and rhetorical studies, was instrumental in revitalizing the program, which has more than doubled in size in recent years. It has grown from around 30 total majors in the program to nearly 20 students in this spring’s senior seminar alone.

“There’s an energy in the department,” says Adam Jones, associate professor of communication and rhetorical studies and department chair.

The name “communication and rhetorical studies” reflects the program’s approach, which gives students experience with the breadth of the discipline and embraces IC’s liberal arts tradition. The core courses offer students in the major a broader field of study than some programs that are narrowly focused, such as a mass communication or organization communication major.

"They see how the study of communication can be applied and integrated into an area that they're interested in — maybe it's sports, maybe it's marketing, maybe it's religion, maybe it's health — whatever it is," Oldenburg, an associate professor in the department, said.

The department receives great feedback from graduate and professional schools who find that IC students come in ahead of their peers thanks to that curriculum and the hands-on learning they get from participating in student-faculty research, Jones said. And beyond caring about what the students learn, faculty care about their wellbeing: Students in the department become part of the family.

Sergio Peña '21 said he has been supported, nurtured and challenged academically during his time as a communication and rhetorical studies major.

“Every single one of those professors, even the ones that I did not have in class, in some way, helped and nurtured my communication abilities, knowledge and skills,” he said. “I feel so prepared for really any academic experience that may be thrown at me in the future in graduate school.”

Every single one of those professors, even the ones that I did not have in class, in some way, helped and nurtured my communication abilities, knowledge and skills.
Sergio Peña '21

Hacker Daniels and Oldenburg have worked on four published or forthcoming projects together — in addition to their other scholarship, teaching and service responsibilities. Hacker Daniels explained that they follow the scholar-teacher model: the idea that being a good scholar enhances teaching, and that working with students informs scholarship. It's not true that doing “vibrant, robust research” research detracts at all the quality of teaching, she said.

Undergraduate student-faculty research isn't just for STEM fields, she added. Students assisting with the research gain valuable hands-on experience. Peña has assisted with research and even co-authored a book chapter with Hacker Daniels.

"You think about the doors that something like that opens for an undergraduate student as they graduate,” she said. “It puts a whole new spin on Graduate READY."

Peña said his competitive graduate school offers are a testament to the department and the work he did with faculty like Hacker Daniels and Oldenburg. He will be attending Penn State in the fall to pursue a master’s and doctorate in communication arts and sciences. Peña explained that student-faculty research challenged him, built his perseverance, developed his critical reading and writing skills, and ultimately set him apart from other applicants.

“The experience and ability to work with faculty so closely is probably one of the things I most value about my time at IC,” he said. “They were able to prepare me both in terms of the skill set, but also in terms of the business or professional side of academics and the communication discipline. And now I just feel really, really excited to take on the next step of my career.”

Hacker Daniels has written or edited numerous books, chapters and other published work, in addition to presenting and sitting on panels at conferences on interfaith rhetoric, First Amendment and freedom of expression, relationship between rhetorical theory and political theory, and theater and drama.

Oldenburg’s focus shifted from political communication and American political discourse to religious rhetoric following an invitation from Hacker Daniels to work on a project on rhetoric and religion. He credits her with opening doors for him as a scholar on the topic and he ultimately wrote a book on the rhetoric of Pope Francis that won the Religious Communication Association Book of the Year Award in 2019, The Rhetoric of Pope Francis: Critical Mercy and Conversion for the Twenty-First Century.

Though Hacker Daniels and Oldenburg have different areas of focus that have evolved over time, their research interests intersect with interfaith communication, rhetoric and religion. Jones said it is in that area where their collaboration has become programmatic research that builds and answers more questions with each project.

Oldenburg noted another special quality to their collaborative work on interfaith communication: he is Catholic and she is Jewish.

"It's not only professionally edifying, but for me it's also enriching interpersonally to be able to work with her in this respect,” he said. “There's this wonderful scholarly synergy that transpires, but then also interpersonally and in terms of our department there’s a collegiality, through all of this, that is inspiring. It is really, really refreshing."

"It just makes for the richest kind of intellectual experience," Hacker Daniels added.

The duo’s current book project is one they were invited to contribute to a series from Peter Lang Publishing. Through a collection of speeches, Hacker Daniels and Oldenburg will study the relationship between religion, rhetoric and violence, and how religious rhetoric can be “a remedy and a poison,” Oldenburg said, adding, “I can’t think of a more timely topic.”

"All of the speeches we're going to explore in this anthology will demonstrate this kind of dynamic — the three kinds of functions that we see religious rhetoric doing as it responds to or incites violence,” he said.

Their research analyzes three ways religious rhetoric is used to incite or react to violence: as a source of comfort and healing; to fuel, incite or justify violence, such as in the case of the Crusades, the 9-11 terrorist attacks, or the insurrection at the U.S. Capitol; or to admonish and inoculate the audience against further violence.

They're definitely helping put IC on the map and I think that's a testament to the quality of the scholarship that they do and the amount that they're publishing. It's a very ambitious research agenda and they're able to do it beautifully.
Communication and Rhetorical Studies Chair Adam Jones

Hacker Daniels said curating speeches to quote in their entirety has presented unique research challenges compared to other projects she has worked on with Oldenburg. Their research efforts provide “million dollar” lessons for students, she said: “They actually see on the ground how to put these kinds of research materials together."

Jones feels a sense of pride watching the collaboration of his colleagues and the recognition their work is garnering for the department and the College.

"They're definitely helping put IC on the map and I think that's a testament to the quality of the scholarship that they do and the amount that they're publishing,” he said. “It's a very ambitious research agenda and they're able to do it beautifully."